Water is a precious resource that we need to preserve, even in countries that they think they have an abundance of it. But cutting down on how much we consume has more to do with the food we eat than the length of our showers. Natalie Muller and Neil King discuss “hidden” or “virtual” water in an article on the Deutsche Welle website.

How big is your water footprint?

How much water does it take to make a cup of coffee?  Hint: it’s much much more than a single cup.

One cup of coffee requires 132 liters (35 gallons) of water, according to calculations by the Water Footprint Network, a platform that aims to advance the sustainable use of fresh water.

This takes the entire production chain into account, including the water that goes into growing the coffee tree, processing the beans, packaging them and transporting them to the supermarket.

It’s what’s known as “hidden” or “virtual” water — we don’t see it being used, but it plays a major role in the production of just about everything we consume, including energy, food, clothing, smartphones, cars and coffee.

“Everything needs water to be produced,” Ertug Ercin, a senior researcher at the Water Footprint Network, told DW.

“There’s a significant amount of water used particularly for food and beverage products. And this is actually your water footprint, which is the total amount of water that is needed for your consumption patterns.”

Ultimately, the water that comes out of our taps at home — our “direct” consumption — only accounts for a tiny share of our overall footprint once our indirect or “virtual” water use is added.

Why does this matter?

Fresh water is a finite resource. Of the estimated 1.386 billion cubic kilometers (333 million cubic miles) of water on earth, just 3% is fresh water. Only around 1% is available to us because the rest is stored away in glaciers or ice caps.

This water is coming under increasing pressure from climate change and the needs of a growing global population. Rising demand for water in agriculture, industry and households has led to fears about water scarcity in some parts of the world.

Some 2 billion people lack access to safe drinking water, according to the UN, while about 2.3 billion live in water-stressed countries.

“We are in a crisis,” said Ercin. “This is alarming. At the same time, availability patterns are changing. We will not find water where we need it the most, when we need it most.”

Preventing severe drought in water-stressed areas is only going to be possible if water is used with more care and efficiency. Which brings us back to water footprints.

How do countries compare?

The water footprints of different countries vary significantly, depending on industrial and agricultural activities and the population’s consumption patterns.

In the US, for example, the average water footprint per person per day is around 7,800 liters, twice the global average. Direct consumption inside homes only makes up about 3.5% of that, or 270 liters per person per day.

Germans use roughly 125 liters per person per day, but that rises to 3,900 liters when “virtual” water is taken into account. In India, meanwhile, an individual’s daily water footprint is around 3,000 liters, while in China it’s 2,934 liters.

According to Ercin, global water use could climb dramatically if India and China start consuming on the same level as people in Europe and the US. 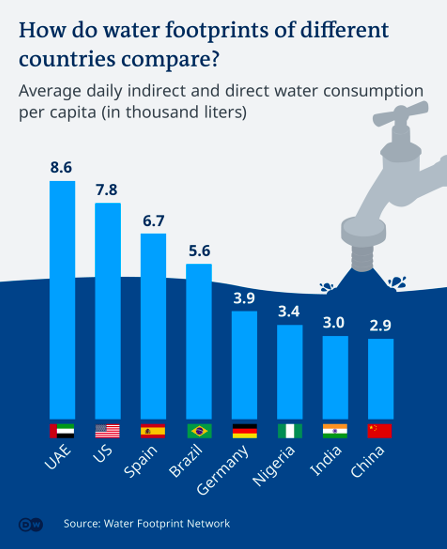 Agriculture is responsible for more than 70% of global water consumption. Products that come from crops or from animals that feed on crops, such as our food and clothing, need a lot of water.

Meat products and nuts are big water users. According to the Water Footprint Network, it takes more than 15,400 liters of water to produce a kilogram of beef, for example. A kilo of nuts needs 9,063 liters, while vegetables are at the lower end of the scale, with 322 liters per kilogram.

Then there’s clothing that comes from water-intensive cotton crops. A 2015 report by Trucost data analysts put the water consumption of a cotton T-shirt at 3,900 liters. A pair of jeans requires around 8,000 liters, according to a Water Footprint Network report. This includes the resources to irrigate and harvest the cotton, convert it into fabric and make the final garment.

Almost 20% of global water withdrawals are for industrial purposes.

The water used to manufacture a smartphone, for example, adds up to 12,760 liters — about 160 baths of water. Much of that is used in the production and assembly of components, mostly to dilute pollutants in waste water released during the manufacturing process.

Numbers can vary from country to country depending on local irrigation, production and manufacturing systems, as well as the climate

How do we shrink our water footprint?

Although water used by individuals at home pales in comparison to the amount used in industry and agriculture, there are things we can do to limit our footprints.

Ercin stresses that the goal should be to consume less stuff generally, given that water is used to manufacture everything. That means using less energy at home, buying second-hand products where possible, recycling, and avoiding food waste. “Every piece of food you waste, means indirectly that you’re just wasting the water,” he said.

Being aware of the water footprint of the food you buy can already make a difference, says Susanne Schmeier, an associate professor of water law and diplomacy at the IHE Delft Institute for Water Education.

How we all waste water

The “hidden” 132 liters behind each cup of coffee, she says, “is definitely something to look at and something where we can probably make an even bigger impact than turning the tap off while we brush our teeth in Europe.”

Drinking less coffee, or switching to tea — which at 27 liters per cup uses a fifth of the water coffee does — is one option. Another is eating more vegetables rather than water-intensive meat products.

Should products have water footprint labels?

There have been calls for companies to use water footprint labels, similar to nutritional labels on food items, to boost public awareness about the water behind products. But so far there’s been no agreement.

“I think it definitely makes sense to do that,” Schmeier said. “Labeling is definitely a step forward to make the consumer here in Europe and in the US more aware and then also be able to make their own choices.”

Water’s connection to global trade and the products we buy is complicated, however. Schmeier points out that there are often other factors to consider when it comes to water-intensive goods imported from other countries.

“We in Europe, and also in the US, consume a lot of food as well as other products for which the resources that are being used are grown in other regions, including in regions that suffer from water scarcity,” she told DW.

“From a water perspective, we maybe shouldn’t be consuming South African grapes anymore. But on the other hand, that is an important economic sector for the country… that’s desperately needed, for example, to advance education or health services. So I think we have to we have to look at both sides of the coin.”

One thought on “Understanding our real water use”