It is not often we see direct comparisons amongst countries for their fuel economy standards. Brad Plumer and Nadja Popovich recently published an article in the New York Times that provided some useful graphs comparing various countries and regions with projections for several years. You should find this quite valuable.

How U.S. Fuel Economy Standards Compare With the Rest of the World’s

On Monday, the Trump administration formally declared that Obama-era fuel economy rules for automobiles were too strict and would likely be weakened in the months ahead.

So how strict are the current rules? While the Obama-era standards for cars and light trucks were on pace to become some of the most aggressive in the world by 2025, they were still less stringent than those set by the European Union, according to an analysis by the International Center on Clean Transportation, which compared standards for different countries.

Several other countries have modeled their vehicle standards after those in the United States, so a rollback by the Environmental Protection Agency could potentially affect standards across the globe.

In 2012, the Obama administration worked with California to set greenhouse gas and efficiency standards for transportation that aimed to roughly double the average fleetwide fuel economy of new cars, S.U.V.s and light trucks by 2025.

If automakers complied with the rules solely by improving the fuel economy of their engines, new cars and light trucks on the road would average more than 50 miles per gallon by 2025 (the charts here break out standards for cars and light trucks separately). But automakers in the United States have some flexibility in meeting these standards. They can, for instance, get credit for using refrigerants in vehicle air-conditioning units that contribute less to global warming, or get credit for selling more electric vehicles.

Once those credits and testing procedures are factored in, analysts expected that new cars and light trucks sold in the United States would have averaged about 36 miles per gallon on the road by 2025 under the Obama-era rules, up from about 24.7 miles per gallon in 2016. Automakers like Tesla that sold electric vehicles also would have benefited from the credit system.

The Obama-era rules were also footprint-based, which means that larger S.U.V.s and light trucks face less stringent standards than smaller passenger cars do — as is true in most countries. 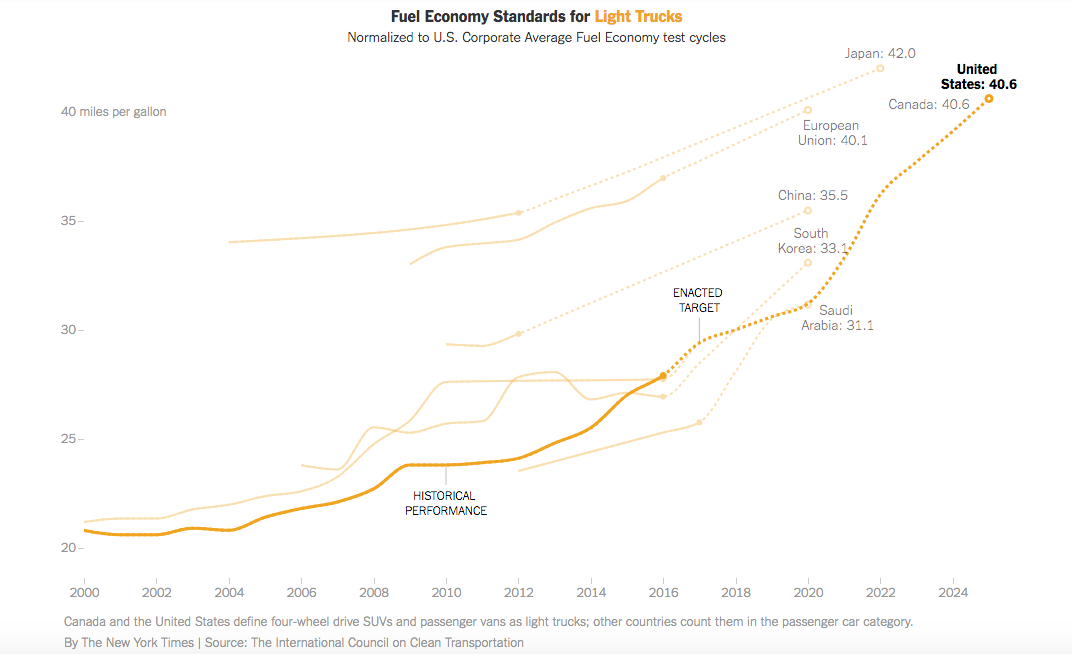 In recent years, as gasoline prices have fallen, more Americans have been opting to buy bigger cars and S.U.V.s. That trend has blunted the fuel savings originally projected under the Obama-era rules. Currently, S.U.V.s and light trucks make up a far larger proportion of new vehicle sales in the United States than they do in Europe:

When President Trump came into office, automakers asked him to ease the fuel economy standards from 2022 to 2025, which had already been scheduled for a midterm review. The E.P.A. has said that it will start a new rule-making process to set “more appropriate” standards, but has not yet defined the rollback.

One option would be to relax the standards altogether in those years. Another would be to give automakers more leeway in the credits they can earn to comply with the rules. But any major changes could set up a showdown with California, which still has the ability to set its own standards.

If the Trump administration does significantly relax the fuel-economy rules, that could have ripple effects around the world. Canada, for instance, has harmonized its standards with the United States, while Mexico and Saudi Arabia essentially use the United States as a model for their own vehicle rules, albeit with a few years’ lag.

The United States has also become a leader in certain technologies to improve vehicle efficiency, such as using aluminum to reduce the weight of cars and trucks. Ford, for instance, has reduced the weight of its popular F-150 pickup truck by 700 pounds in recent years. If the United States greatly weakens its standards, some of that research could potentially slow down.

The European Union is currently considering a new round of even stricter standards that extend until 2030, while Australia has been exploring new vehicle rules modeled off the United States. “If the U.S. weakens its rules, automakers elsewhere could use that to lobby European and Australian regulators to be less strict,” said Anup Bandivadekar, a researcher at the International Council on Clean Transportation.