Visakhapatnam News reports on the Times of India website that the Andhra Pradesh government is taking important steps to launch an IoT project for MSMEs to promote greater energy efficiency.

The government will launch an Internet of Things (IoT) pilot project in micro, small and medium enterprises in all districts to study energy efficiency measures. After the success of the initial project in an MSME unit in East Godavari district, the Union ministry of power-led Bureau of Energy Efficiency has agreed to and sanctioned funds to extend the IoT pilot project to all districts.

The AP State Energy Conservation Mission (APSECM) in coordination with the industries department will take up the project in five MSME units in each district under the initiative. The move is expected to help MSMEs improve their energy performance and savings, competitiveness and productivity. 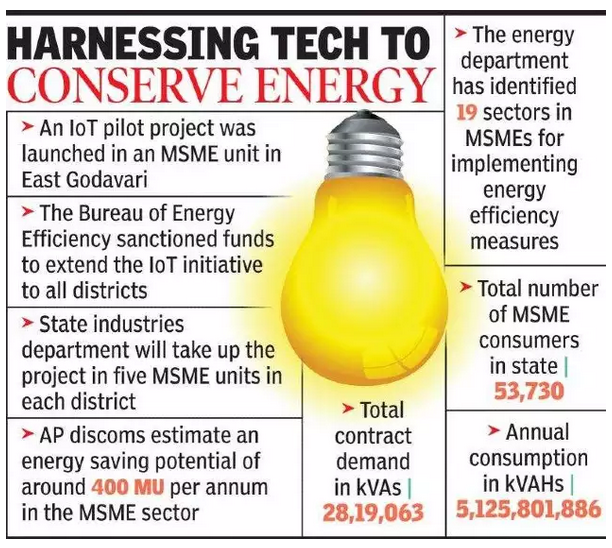 The IoT project may identify the scope for introducing latest energy efficiency technologies to replace existing obsolete or inefficient technologies. According to officials in the state, the Bureau of Energy Efficiency sanctioned the project with funding support within a record period of 24 hours.

The government has identified around 19 sectors in MSMEs with opportunities for energy efficiency. Discoms in the state estimate that the sector has an energy saving potential of around 400 MU per annum at the rate of at least 10 per cent energy savings out of a total existing consumption of 5,125 million kilovolt ampere hour.

Under the pilot project, IoT-enabled power control devices would be installed to examine energy efficiency measures in various kinds of small and medium industries. The initial pilot project that was taken up in Padma Ceramics in East Godavari district found that the IoT device would help save around 11,000 units per annum with an annual monetary benefit of Rs 80,000.

State officials informed that the device supports real-time monitoring of various electrical parameters and gives information on voltage fluctuations through mobile phone communication, which would help MSME owners take immediate steps to save energy and ensure safety of machines.

“It wants to improve energy efficiency in the MSME sector through accelerating adoption of innovative energy-efficient technologies, such as IoT-enabled power monitoring systems, etc.” said Srikant.

When the energy secretary informed chief secretary and chairman of APSECM, Nilam Sawhney, about the quick response of BEE, the chief secretary said the response of the Union ministry of power and BEE towards promoting energy efficiency measures in Andhra Pradesh is commendable.

“The state government will continue its efforts to make Andhra Pradesh one of the best states in the energy efficiency sector,” said Nilam Sawhney.