The cost improvements in renewable energy technologies in recent years is staggering and now the cheapest energy options in most of the world according to new research. Giles Parkinson explains in an article on the Renew Economy website.

Further cost reductions in both large scale solar PV and onshore wind projects mean that these two technologies are now the cheapest form of new build energy generation in areas that count for two thirds of the world’s population, and 85 per cent of the globe’s electricity generation.

The latest benchmark report from research company BloombergNEF show that in just the last six months the levellised cost of electricity (LCOE) for onshore wind has fallen a further nine per cent, its most significant drop in five year.

The cost of utility scale PV, already down 90 per cent over the past decade, has fallen a further 4 per cent. The takes their respective benchmark, or global average costs taking into account the varied wind and solar resources, to an average of $US44/MWh for wind and $US50/MWh for utility scale solar.

BloombergNEF also points to the plunging costs of battery storage, down half over the last two years, which means that batteries are now the cheapest new-build technology for peaking purposes (up to two-hours of discharge duration) in gas-importing regions, like Europe, China or Japan.

In Australia, where the conservative Coalition government can barely utter the words wind and solar, and is under huge pressure to build new coal plants, and wants to expand its gas reserves, the difference is even more marked. The best LCOE for solar in Australia is $A40/MWh and for wind it is $A50/MWh, according to BNEF.

“In Australia, renewables are by far the cheapest new source of bulk generation,” says the Sydney-based BNEF analyst Lara Panjkov.

“Our analysis also suggests that co-locating renewables and batteries can be attractive for the provision of new dispatchable power.”

And that is starting to show in the number of projects that are combining both, where the costs of wind and storage is down to as low as $A77/MWh, and solar and storage to $A90/MWh. Battery storage alone is beating open cycle gas on price in Australia. “Today we estimate that approximately 711MW of new renewable energy plants with paired storage have secured financing,” Pakjkov says.

The cost estimates for technologies in Australia are (all figures in US dollars).

The BNEF studies add to the growing weight of evidence about cheap wind and solar, and the falling cost of battery storage, be it from the combined assessment of the CSIRO and the Australian Energy Market Operator, the latest research pushing for renewable hydrogen by the Australian Renewable Energy Agency, and an endless number of private analysts, the most latest from Reputex.

BNEF attributes the falling costs of these technologies to a combination of technology improvements, manufacturing efficiencies, and the impact of policy instruments such as reverse auctions.

There have been dramatic improvements in the cost-competitiveness of solar and wind,” says lead author Tifenn Brandily.

“Part of it is due to photovoltaic and wind technology getting better at extracting renewable resources. But our analysis also suggests that since 2016, auctions are forcing developers to realise cost savings by scaling up project size and portfolios. Larger scale enables them to slash balance-of-plant, operations and maintenance expenses – and have a stronger negotiating position when ordering equipment.”

BNEF specifically attributes the fall in onshore wind costs to a scale-up in turbine size,  which now averages 4.1 megawatts, and is priced at about $US0.7 million per megawatt for recently financed projects. 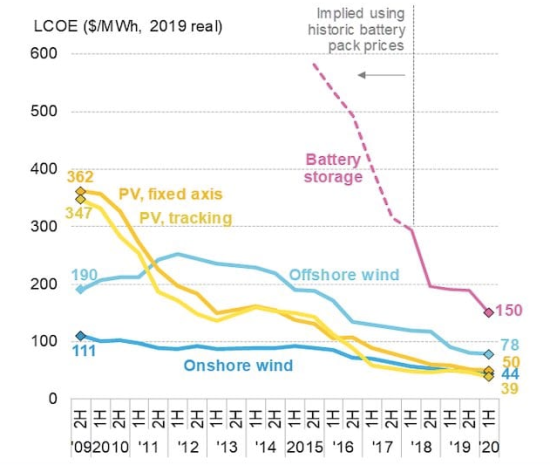 The best in class projects can deliver an LCOE of little more than half that of the global average. That means an LCOE cost of $US24/MWh, and the best projects in U.S., India and Spain are priced at $26, $29 and $29 per megawatt-hour respectively, excluding subsidies such as tax-credits.

In China, the largest PV market, BloombergNEF says its solar benchmark is $US38/MWh, a fall of 9% from the second half of 2019 due to a rapid uptake in better performing monocrystalline modules.

Importantly, BloombergNEF says new-build solar in  China is now almost on par with the running cost of coal-fired power plants, at an average of $US35/MWh. “This is significant as China advances on its deregulation agenda, opening up competition in the power sector,” it notes.

The cheapest large scale solar PV projects financed in the last six months will be able to achieve an LCOE of between $US23 and $US29 per megawatt-hour, assuming competitive returns to their equity investors. Those projects can be found in Australia, China, Chile, and the U.A.E., where they will challenge the existing fleet of fossil fuel power plants.

And the costs will fall further.

“On current trends, the LCOE of best-in-class solar and wind projects will be pushing below (US) 20 dollars per megawatt-hour this side of 2030,” Brandily said.

“A decade ago, solar generation costs were well above $US300, while onshore wind power hovered above $US100 per megawatt-hour. Today the best solar projects in Chile, the Middle-East and China, or wind projects in Brazil, the U.S. and India, can achieve less than $30 per megawatt-hour. And there are plenty of innovations in the pipeline that will drive down costs further.” 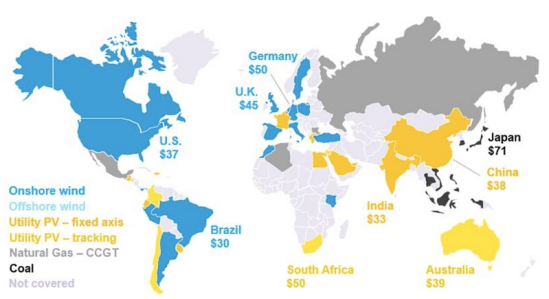 The same trajectory is expected to be followed by the costs of battery storage as scale unlocks further reductions.

The average capacity of storage projects sits at about 30 megawatt-hours, a fourfold rise compared to just seven megawatt-hours per project four years ago.

Since 2018, increasing project sizes – such as the so-called Tesla big battery ta Hornsdale in South Australia (150MWh) – combined with a rapidly expanding manufacturing base and more energy dense chemistries, have halved the LCOE of energy storage.

China is home to the cheapest storage levelized costs globally, at $US115 per megawatt-hour, thanks to the proximity of developers to the equipment supply chain and the more widespread use of cheaper LFP (lithium iron phosphate) chemistries.

To put that in comparison with more traditional “peaking” generation,  the levelized cost of open-cycle gas turbines per megawatt-hour sits today between $US99 in the U.S. and $US235 in Japan, with China at $US145.

As for the potential impact of the Covid-19 pandemic, BNEF chief economist Seb Henbest says much will depend on the cost and availability of finance over the short to medium term.

“Another concerns commodity prices,” Henbest says. “Coal and gas prices have weakened on world markets. If sustained, this could help shield fossil fuel generation for a while from the cost onslaught from renewables.”

BNEF’s LCOE analysis is based on information on real projects starting construction, and proprietary pricing information from suppliers. Its database covers nearly 7,000 projects across 25 technologies (including the various types of coal, gas and nuclear generation as well as renewables), situated in 47 countries around the world.