It is good to see the views on our global energy situation from others around the world.  Rohan Abraham writes in the Economic Times of India about recent trends in energy consumption.

The risk is real: Global energy consumption up by 2.3%, experts blame it on tech & population

The balance of power has shifted in the tug of war between climate change deniers and environmental activists. The emergence of activists like Greta Thunberg notwithstanding, ground has been ceded to the other side, irrespective of global growth slowing on account of a bruising trade war between the United States and China.

According to Capgemini’s annual World Energy Markets Observatory (WEMO) report, global energy consumption increased 2.3 per cent, nearly double the average rate since 2010. This would have been less alarming had the share of non-renewables in the energy mix gone down over the years.

Nearly 75 per cent of the increase in energy demand was met by oil, coal, and natural gas, causing greenhouse gas emissions to increase 2 per cent globally. The report attributes the spike in emissions to a lack of technological breakthroughs and population growth.

However, global emissions had plateaued between 2014 and 2016, giving activists reason to cheer. But greenhouse gas emissions rose 1.6 per cent in 2017, before going up by 2 per cent last year. This trend coincides with the election of Donald Trump as United States President, who is a self-proclaimed climate change denier. 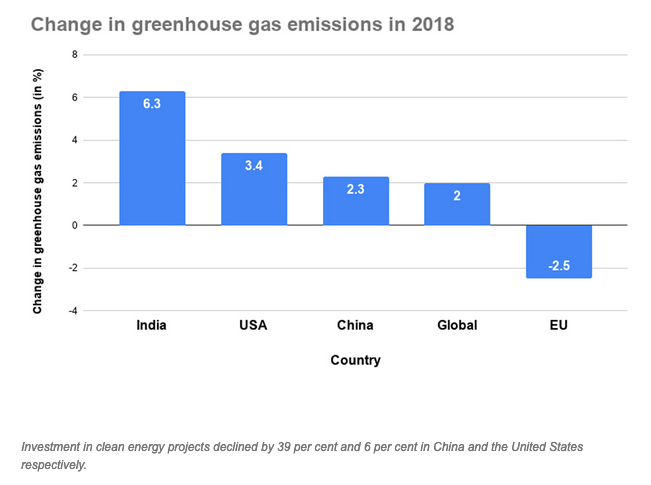 Incidentally, the growth rate in all three economies was tepid in the past few quarters despite an increase in energy consumption – between 3.5 per cent and 4 per cent last year. Moreover, governments seem to be reneging on their promise to transition to renewable energy.

Investment in clean energy projects declined by 39 per cent and 6 per cent in China and the United States respectively. India is a notable outlier among large economies, having increased investment in renewable energy .

The outlook is not entirely gloomy. The European Union (EU) registered a 2.5 per cent reduction in emissions in 2018. This was complemented by a 14.5 per cent growth in renewable power generation, with installation costs going down for wind and solar power. Electric vehicle (EV) sales are also on the rise.

The market for EVs grew by 79 per cent in the United States and China, and 34 per cent in the EU. However, in markets where power generation is largely driven by fossil fuels, like in thermal power plants which use coal, an increase in EV penetration is not offsetting emissions, but only causing its migration from one source to the other – from vehicular exhaust to emission from power plants.