Steven Nadel writes on the American Council for an Energy-Efficient Economy (ACEEE) website about his analysis to explain why electricity use is declining in the U.S. It would be good to see equivalent analysis for Europe or other regions.  Let us know.

U.S. Electricity Use is Declining and Energy Efficiency May be a Significant Factor

U.S. electricity sales peaked in 2007 and have been declining modestly since then. Sales in 2012 were 1.9% lower than 2007 sales, and sales in the first ten months of 2013 are below the same period in 2012. While the economic recession is an obvious explanation for the decline in sales in 2008 and 2009, it is much less clear why sales have continued to decline since then, even as the economy began to recover. While some observers have attributed this stalled growth to the ongoing effects of the “Great Recession,” other observers suggest other factors may have played a role, such as erosion of manufacturing, more efficient buildings, lighting and appliances and increased use of on-site generation.

ACEEE has just completed an analysis on electricity-use trends since 1993 and we looked at changes in sales over the 2007-2012 period in particular. We found that no single factor can explain the change in electricity use over the 1993-2012 period. The factors that appear most significant were energy efficiency programs and policies, warmer weather, changes in gross domestic product (GDP), changes in electricity prices, and long-term trends. 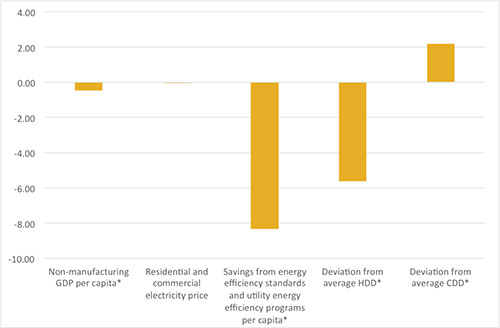 Note: Asterisked variables are statistically significant with 90% confidence in our regression analysis.

Further analysis and more data are needed to better understand the relative contribution of energy efficiency to declining electricity sales. In particular, we need to further examine what is occurring in the industrial sector. That analysis may need to wait for better industrial data to emerge, and for underlying trends in this sector to further manifest themselves as the sector recovers from the “Great Recession.”

The factors influencing electricity use are complex and difficult to boil down to a few key explanatory factors. For a variety of reasons we explain in the full paper, our results should be considered indicative, not definitive. It will be useful to update the analysis in a few years to see if the recent decline in electricity use, and the contribution of energy efficiency to this decline, continue. For example, if the recent cold winter weather continues, electricity for heating could be higher in 2014. Even so, our analysis suggests that energy efficiency has become an important factor in the level of U.S. electricity consumption.

2 thoughts on “Explaining why electricity use is declining”