As countries such as England are planning to make the housing stock net zero by 2050, recent research shows significant regional differences. Major cities across England and all local authorities across the south and south-east have below average energy intensity while homes in northern local authorities and less built-up urban areas have above average energy intensities. André Neto-Bradley and Ruchi Choudhary of the University of Cambridge together with Nick Malleson and Patricia Ternes of University of Leeds discuss their findings in an article on The Conversation website. One wonders what this will mean to government policy to reach net zero.

The energy used to heat and light our homes doesn’t get as much attention as aviation, coal power or steel production, yet it contributes to more than 10% of emissions worldwide. Improving the energy efficiency of homes and reducing the carbon used to heat them is essential.

In the UK, the government recently announced a £5,000 subsidy for households to install heat pumps. The measure is part of a policy which aims to phase out installation of gas boilers by 2035, with a view to making building stock net zero by 2050. However, this assumes that heating demand is relatively even across the country and doesn’t consider the impact of regional inequality in energy efficiency.

Preliminary results from our ongoing research suggest that the energy efficiency of homes built in the past 20 years varies considerably depending on where you are. We modelled this in England using census and spatial data alongside energy performance certificates. Our model focused on homes built in the past 20 years, as these are very likely to still be in use in 2050 and therefore achieving net zero emissions targets will require a reduction in emissions from heating these very homes. 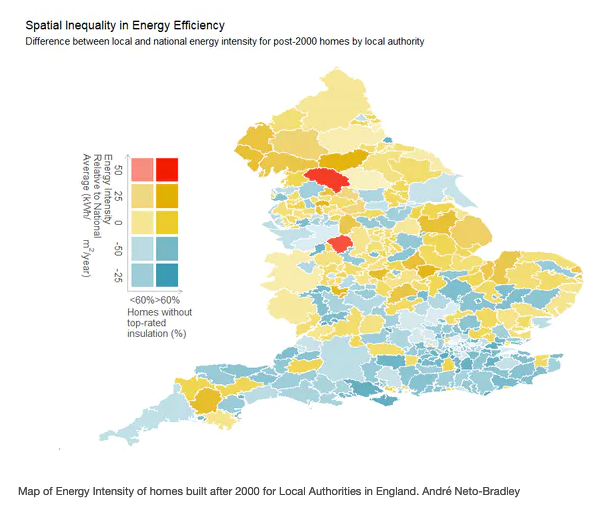 The modelled energy intensity – that’s how much energy is used to heat a certain floor area – is distinctly unequal. Although we would expect some variation across the country, the regional patterns are striking. Major cities across England and all local authorities across the south and south-east have below average energy intensity. This means that in those areas, houses on average are expected to need much less energy relative to their size. On the other hand, homes in northern local authorities and less built-up urban areas have above average energy intensities.

This has a direct impact on individual household finances. For a family in a three-bedroom house with a gas boiler, it could translate to a difference of nearly £200 in annual energy bills. Heating the less efficient home would also use more carbon. In the above example, the family in Bradford could be responsible for emitting almost a tonne of extra CO₂ each year just to keep their home warm.

A home in Bradford isn’t less efficient just because it is in Bradford. Differences in local temperature can have an impact on energy consumption, but the average difference between Bradford and Wokingham is only about 1°C. Instead, this difference primarily relates to the type of housing being built and crucially the quality of said housing in each of these areas. This in turn also reflects differences in the wealth of people homes are being built for.

Energy efficiency is linked to wealth

Several underlying factors explain this pattern. Homes in areas with higher energy intensity tend to have poorer quality insulation. They are also likely to have secondary heating systems like electric heaters alongside a gas heating system. This corresponds to patterns in socio-economic indicators. Low household earnings, low life expectancy at birth and high levels of fuel poverty are all correlated with above average energy intensity of homes. In the examples above, Bradford is one of the most income-deprived of England’s local authorities, while Wokingham has second lowest level of income deprivation.

What is clear is that the inequality between areas in the energy performance of homes built post-2000 is not simply indiscriminate. The new heat pump policy, like many previous policies that promoted residential energy efficiency, does not account for regional inequalities in the quality of homes. Policies can only be more effective if they recognise these large variations. This would mean targeting both subsidies and incentives to areas with less energy efficient homes, but also matching technologies appropriately to the specific characteristics of homes.

For example, air source heat-pumps need space indoors and outdoors that some homes don’t have. In any case, they would not reduce the energy used to heat a poorly-insulated house. Furthermore, heat-pumps use electricity as opposed to the gas in a boiler to heat a home, and around 40% of the UK’s electricity is generated using gas. This means that targeting support to improve and refurbish inefficient homes could have a more immediate impact on carbon emissions while also reducing financial burden on households.

Previous research has pointed to the potential economic benefits of making homes more energy efficient, not only for the household but for local businesses too. Locally targeted programmes to improve energy efficiency could have the positive side-effect of supporting local economies in more deprived areas.