The UK is on track to blow past emissions promises made ahead of COP26 in Glasgow unless tougher policies to cut carbon are introduced this decade, official climate advisers have warned. The CCC said the UK does not need to redraw its targets, but does need to come forward with plans to deliver on what it has promised. Roger Harrabin discusses the issues in an article on the BBC website. So, is your country on track?

The Climate Change Committee (CCC) says that, at current rates, the UK will be contributing to a disastrous temperature rise of 2.7C by 2100.

It says this could – in theory – be brought down to just under 2C.

But this could only happen if ministers agree tougher policies, and if other nations slash emissions too.

The government insists that it will meet all its climate change targets.

But the CCC says Britain will set a better example to the world if it keeps the same targets but actually delivers them through stronger policies.

It maintains that the government must nudge people towards greener lifestyles, and must tackle emissions from farming more aggressively. 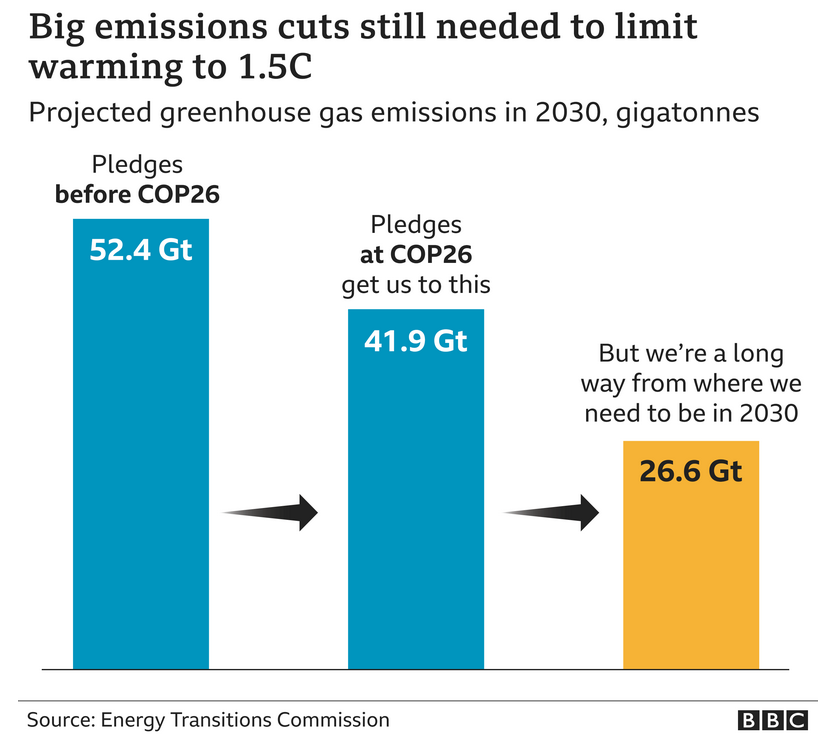 “If it sets tougher targets that will simply widen the gap between ambition and delivery. What we really need is to strengthen delivery – and show the world that it can be done.”

His group has produced a shortlist of ideas to support Britain’s climate leadership.

They include producing convincing plans to cut emissions by 78% by 2035; and drawing up agreements to radically reduce so-called “embodied emissions” from major polluters such as steel and cement.

The CCC also says the UK should act to reduce embodied emissions in imported goods – the emissions created to make the stuff British residents buy.

This could happen through taxes imposed on carbon-intensive goods being imported into the UK.

Another proposed strategy could be based on the final agreement at COP to phase out inefficient subsidies for fossil fuels.

The committee says this gives the government licence to change tax policy so that fossil fuels pay for the damage they cause to the climate. It says the current tax system is currently clearly inefficient because it fails to bear down on polluting sectors that are damaging the climate.

This proposal could lead to increases in the cost of petrol, gas and aviation.

The government has been reviewing tax options, but it’s been reported that senior ministers have warned against policies that could increase the cost of living for some.

UK climate experts are worried about the Treasury’s role in emissions policy. The Chancellor was widely blamed for failing to support the ill-fated Green Homes Grant. And, in his Budget just days before the COP, he omitted to mention climate change.

“For the committee (CCC) to suggest it’s OK for the UK to contribute to a temperature rise approaching 2C is outrageous. We know that a rise of 1.5C isn’t safe – we’re not even all safe now with a rise of 1.1C.

“What are we going to tell future generations about how we wrecked the climate?”

A government response to the CCC has been sought.