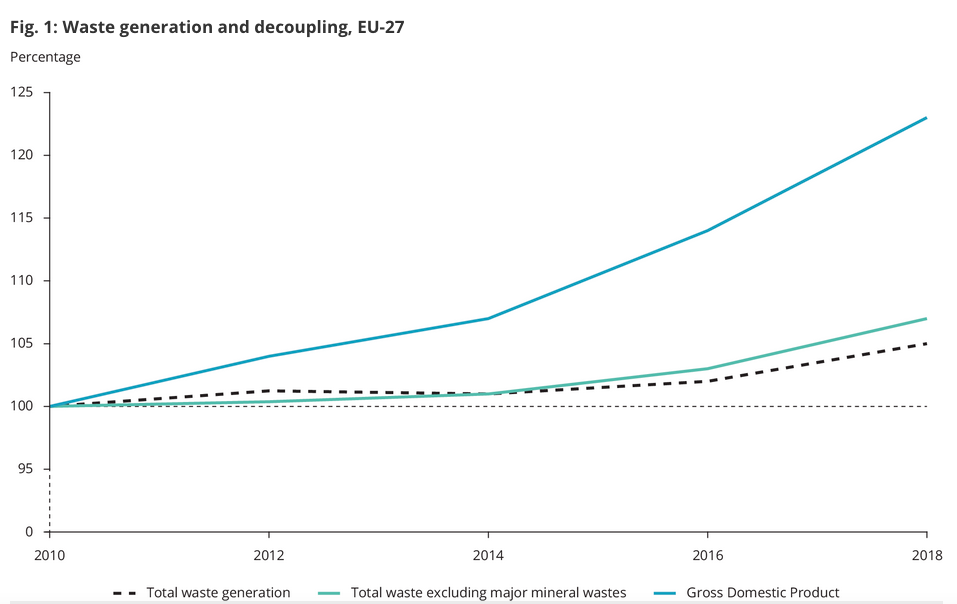 Note: This figure shows indexed values of waste production, population and gross domestic product (GDP) with the year 2010 as a reference year (2010=100%). The production phase shows generation of total waste and waste excluding major mineral wastes in absolute terms. GDP was chosen as a basic indicator of economic growth as it expresses the total value of goods and services produced in the country (the components of GDP include personal consumption expenditure plus business investment plus government spending plus (exports minus imports)). Population, expressed as average population, is an important demographic indicator, which provides insights into development in a number of possible consumers and waste producers.

Waste generation is increasing in the EU. Reducing this, and achieving the absolute decoupling of waste generation from economic growth, is a primary objective of EU waste and circular economy policies (EC, 2011, 2018 and 2020). The EU Waste Framework Directive (EU, 2018) sets out a waste hierarchy, the guiding principle of EU and national waste policies.

From 2010 to 2018, total waste generation increased by 5.0% (114 million tonnes) in the 27 EU Member States (EU-27). Major mineral wastes, such as hard rocks, concrete, soils and others (that are mainly produced in the mining and construction sectors) feature in big quantities in relation to other waste types. This alters the interpretation of trends. They also usually represent an environmental issue of relatively less concern. If we exclude them from the totals, the remaining waste streams, more environmentally significant, increased even more, by 7.0% (50.3 million tonnes).

Note: The figure shows waste generation, excluding major mineral wastes, per capita by European country. Data presented in form of a bar chart are displayed as a comparison of the reference year (2010) and the last available year.

On average, 1.8 tonnes of total waste (excluding major mineral wastes) were generated per European citizen, up from 1.7 tonnes/capita in 2010. This average masks large country differences, both in absolute waste volumes per capita and in the waste generation trend.

Amounts generated ranged from less than 1 tonne per capita to 9.7 tonnes per capita in 2018. The large quantity of waste generated in Estonia is related to energy production based on oil shale (Eurostat, 2019a), while waste data for North Macedonia show a high degree of fluctuation over time. These differences partly reflect differences in the structures of countries’ economies, and extreme values or significant differences can be explained by specific situations in individual countries.

Trends over time also show a mixed picture: total waste (excluding major mineral wastes) generated per capita increased between 2010 and 2018 in 18 countries and decreased in 15 countries. In some cases, trends have been influenced by improvements in data quality over time.