Xpeng Motors, a Chinese electric car start-up, recently opened a large assembly plant in southeastern China and is building a matching factory nearby. It has announced plans for a third.

Another Chinese electric car company, Nio, has opened one large factory in central China and is preparing to build a second a few miles away.

Zhejiang Geely, owner of Volvo, showed off an enormous new electric car factory in eastern China last month rivaling in size some of the world’s largest assembly plants. Evergrande, a troubled Chinese real estate giant, has just built electric car factories in the cities of Shanghai and Guangzhou and hopes to be making almost as many fully electric cars by 2025 as all of North America.

China is erecting factories for electric cars almost as fast as the rest of the world combined. Chinese manufacturers are using the billions they have raised from international investors and sympathetic local leaders to beat established carmakers to the market.

Success is far from assured. The players include start-ups, electronics manufacturers and other car industry rookies. They are betting that drivers in China and beyond will be willing to spend $40,000 or more for brands that they had never heard of.

Chinese automakers concede that experience gives the established car companies some advantages. But they insist their plans will work.

“We have the will, and we have the patience,” said He Xiaopeng, the chairman and chief executive of Xpeng, in an interview. “I think we will find it very challenging, but we must also move forward.”

The Chinese industry has momentum. China will be making over eight million electric cars a year by 2028, estimates LMC Automotive, a global data firm, compared with one million last year. Europe is on track to make 5.7 million fully electric cars by then.

General Motors and other North American automakers have plans to catch up. In April, President Biden called for the United States to step up its electric vehicle efforts. During a virtual visit to an electric bus factory in South Carolina, he warned, “Right now, we’re running way behind China.”

North American automakers are on track to build only 1.4 million electric cars a year by 2028, according to LMC, compared with 410,000 last year. 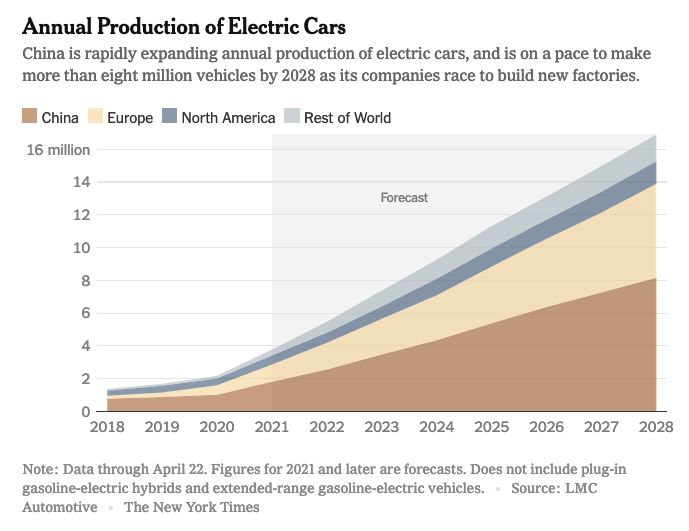 China already has the electric car infrastructure, thanks to a government-backed nationwide rollout of over 800,000 public charging stations. That is almost twice as many as the rest of the world, although drivers in the United States — who are more likely to live in single-family houses — can more easily plug in their cars at home.

With a slower deployment of charging stations outside China, automakers elsewhere plan to continue building some plug-in hybrid cars with small gasoline engines for a few more years. But the market for fully electric cars is already bigger than for plug-in hybrids, and the electric cars’ lead is widening rapidly. Automakers like G.M. plan to eliminate gasoline and diesel engines entirely in the next 15 years.

For the new Chinese cars, name recognition will be a major challenge. The brands are mostly unfamiliar even to Chinese drivers. On roads filled with Buicks, Volkswagens and Mercedes-Benzes, they could struggle to stand out.

Alibaba, the e-commerce company, and two state-backed firms have set up an electric car joint venture under the name IM Motors, which plans to begin delivering cars early next year.

Evergrande plans to make and sell a million fully electric cars a year by 2025. So far, it has sold none.

Geely, an industry veteran with recognized brands in China, has named its electric brand Zeekr, which rhymes with “seeker.” It plans to begin delivering cars in October.

The Zeekr is being made in a new electric car factory near Ningbo, on China’s eastern coast. The factory is a cavernous space with miles of white conveyor belts and rows of 15-foot cream-colored robots made by ABB of Sweden. It has an initial capacity of 300,000 cars a year, larger than most car factories in Detroit, and floor space for expansion.

“What is the most important thing is, China has the market,” said Zhao Chunlin, the factory’s general manager.

Mr. He named Xpeng, pronounced “X-pung,” after himself. Xpeng’s niche feature is a cooing, Siri-like voice assistant that guides the car’s internet services, like directions and music, and its computer-assisted highway driving. Xpeng plans to have the capacity to make 300,000 cars a year by 2024; last year it sold fewer than one-tenth that many.

Mr. He made his first fortune developing a mobile phone browser company, UCWeb. He sold it to Alibaba in 2014 and became president of Alibaba’s mobile business services unit. The same year he helped bankroll two former executives from state-owned Guangzhou Auto to start Xpeng.

Three years later, Mr. He took direct control of Xpeng and left Alibaba, which also acquired a small stake in the automaker. Mr. He said that his second child had been born, and that he wanted to be able to tell his son that he led a car company. Mr. He holds 23 percent of Xpeng’s shares, while Alibaba holds 12 percent.

Chinese government officials have helped along the way. A state-owned enterprise in Zhaoqing, a 1,000-year-old jade-carving town near Guangzhou, lent $233 million to Xpeng in 2017 for the construction of its initial factory with annual capacity of about 100,000 cars. The city has been subsidizing the company’s interest payments since then, according to Xpeng’s regulatory filings.

The city of Wuhan helped Xpeng buy land and borrow money at low interest rates for a new plant there. The Guangzhou government also helped Xpeng start building its factory in that city, said Brian Gu, vice chairman and president of Xpeng.

Last year, after weathering the pandemic, Xpeng cashed in on Wall Street, where Tesla’s rise whetted investor appetite for the industry. The Chinese company raised $5 billion in an initial public offering and subsequent share sales. It is spending part of the money on new factories and part of it on research and development, particularly in autonomous driving.

The factory took only 15 months to build, considerably faster than assembly plants in the West. Yan Hui, the general manager of the factory’s final assembly area, said decisions were made more quickly than at the German auto parts manufacturer where he used to work.

Even though many of the electric car brands are new to China, their owners already have ambitions abroad. Xpeng is starting to export cars to Europe, beginning with Norway. Chery, a big state-owned automaker in central China, announced last week that it would start exporting gasoline-powered cars to the United States next year and follow with electric cars.

The United States will be a difficult market. The Trump administration imposed 25 percent taxes in 2018 on cars imported from China, which has slowed exports. Many electric car parts are covered by the same tariffs. That makes it harder, but not impossible, for Chinese companies to start shipping electric cars in kits to the United States for assembly.

Michael Dunne, the chief executive of ZoZo Go, a consulting firm specializing in the electric car industry in Asia, said the industry’s outlook was becoming clear: “China is going to be the global dominator when it comes to making electric cars.”