Simon Jessop, Matthew Green and Ross Kerber write on the Reuters website that investors are pushing companies to accelerate their actions on climate change. This is a good, detailed article that should be read.

Show us the plan: Investors push companies to come clean on climate

In the past, shareholder votes on the environment were rare and easily brushed aside. Things could look different in the annual meeting season starting next month, when companies are set to face the most investor resolutions tied to climate change in years.

Those votes are likely to win more support than in previous years from large asset managers seeking clarity on how executives plan to adapt and prosper in a low-carbon world, according to Reuters interviews with more than a dozen activist investors and fund managers.

In the United States, shareholders have filed 79 climate-related resolutions so far, compared with 72 for all of last year and 67 in 2019, according to data compiled by the Sustainable Investments Institute and shared with Reuters. The institute estimated the count could reach 90 this year.

Topics to be put to a vote at annual general meetings (AGMs) include calls for emissions limits, pollution reports and “climate audits” that show the financial impact of climate change on their businesses.

A broad theme is to press corporations across sectors, from oil and transport to food and drink, to detail how they plan to reduce their carbon footprints in coming years, in line with government pledges to cut emissions to net zero by 2050.

“Net-zero targets for 2050 without a credible plan including short-term targets is greenwashing, and shareholders must hold them to account,” said billionaire British hedge fund manager Chris Hohn, who is pushing companies worldwide to hold a recurring shareholder vote on their climate plans.

Many companies say they already provide plenty of information about climate issues. Yet some activists say they see signs more executives are in a dealmaking mood this year.

While most resolutions are non-binding, they often spur changes with even 30% or more support as executives look to satisfy as many investors as possible.

“The demands for increased disclosure and target-setting are much more pointed than they were in 2020,” said Daniele Vitale, the London-based head of governance for Georgeson, which advises corporations on shareholder views.

While more and more companies are issuing net-zero targets for 2050, in line with goals set out in the 2015 Paris climate accord, few have published interim targets. A study here from sustainability consultancy South Pole showed just 10% of 120 firms it polled, from varied sectors, had done so.

“There’s too much ambiguity and lack of clarity on the exact journey and route that companies are going to take, and how quickly we can actually expect movement,” said Mirza Baig, head of investment stewardship at Aviva Investors.

Sarasin studied the emissions of the roughly 1,500 firms in the MSCI World Index, a broad proxy for the world’s listed companies. It calculated that if companies globally did not curb their emissions rate, they would raise global temperatures by more than 3 degrees Celsius by 2050.

That is well short of the Paris accord goal of limiting warming to “well below” 2C, preferably 1.5C.

At an industry level, there are large differences, the study found: If every company emitted at the same level as the energy sector, for example, the temperature rise would be 5.8C, with the materials sector – including metals and mining – on course for 5.5C and consumer staples – including food and drink – 4.7C. 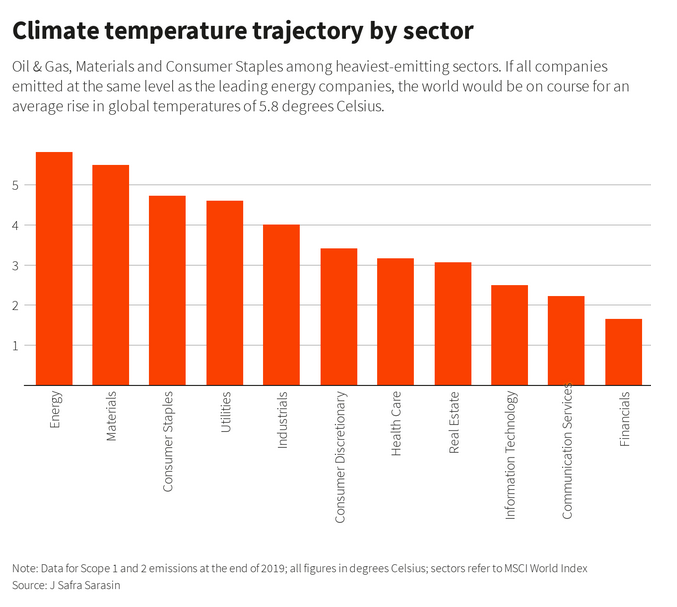 The calculations are mostly based on companies’ reported emissions levels in 2019, the latest full year analysed, and cover Scope 1 and 2 emissions – those caused directly by a company, plus the production of the electricity it buys and uses.

Sectors with high carbon emissions are likely to face the most investor pressure for clarity.

In January, for example, ExxonMobil – long an energy industry laggard in setting climate goals – disclosed its Scope 3 emissions, those connected to use of its products.

Calpers’ Simiso Nzima, head of corporate governance for the $444 billion pension fund, said he saw 2021 as a promising year for climate concerns, with a higher likelihood of other companies also reaching agreements with activist investors.

“You’re seeing a tailwind in terms of climate change.”

However, Exxon has asked the U.S. Securities and Exchange Commission for permission to skip votes on four other shareholder proposals, three related to climate matters, according to filings to the SEC. They cite reasons such as the company having already “substantially implemented” reforms.

An Exxon spokesman said it had ongoing discussions with its stakeholders, which led to the emissions disclosure. He declined to comment on the requests to skip votes, as did the SEC, which had not yet ruled on Exxon’s requests as of late Tuesday.

Given the influence of large shareholders, activists are hoping for more from BlackRock, the world’s biggest investor with $8.7 trillion under management, which has promised a tougher approach to climate issues.

Last week, BlackRock called for boards to come up with a climate plan, release emissions data and make robust short-term reduction targets, or risk seeing directors voted down at the AGM.

It backed a resolution at Procter & Gamble’s AGM, unusually held in October, which asked the company to report on efforts to eliminate deforestation in its supply chains, helping it pass with 68% support.

“It’s a crumb but we hope it’s a sign of things to come” from BlackRock, said Kyle Kempf, spokesman for resolution sponsor Green Century Capital Management in Boston.

Asked for more details about its 2021 plans, such as if it might support Hohn’s resolutions, a BlackRock spokesman referred to prior guidance that it would “follow a case-by-case approach in assessing each proposal on its merits”.

Vanguard, the world’s second-biggest investor with $7.1 trillion under management, seemed less certain, though.

Lisa Harlow, Vanguard’s stewardship leader for Europe, the Middle East and Africa, called it “really difficult to say” whether its support for climate resolutions this year would be higher than its traditional rate of backing one in ten.

‘There will be fights’

In a “Say on Climate” resolution, investors ask a company to provide a detailed net zero plan, including short-term targets, and put it to an annual non-binding vote. If investors aren’t satisfied, they will then be in a stronger position to justify voting down directors, the plan holds.

Hohn has already filed at least seven resolutions through TCI. The Children’s Investment Fund Foundation, which Hohn founded, is working with campaign groups and asset managers to file more than 100 resolutions over the next two AGM seasons in the United States, Europe, Canada, Japan and Australia.

“Of course, not all companies will support the Say on Climate,” Hohn told pension funds and insurance companies in November. “There will be fights, but we can win the votes.”