Fewer than 20 councils in England and Wales have taken any enforcement action against landlords for renting out cold and draughty properties. Madeleine Cuff discusses the problem in an article on the inews website.

Councils are failing to enforce energy efficiency regulations designed to protect renters living in the most cold and draughty homes.

Fewer than six per cent of borough and district councils across England and Wales have taken any enforcement action against landlords illegally letting out properties with the lowest energy efficiency ratings, data obtained by i reveals.

One landlord told the paper: “Are people from the council coming out and asking to look at your Energy Performance Certificate? The answer is no. It’s not being policed. Without a doubt.”

The news follows the Chancellor’s announcement of a £2bn scheme to help homeowners plug draughty homes, with the Government covering two-thirds of the cost of improvements up to £5,000.

But less energy is going in to forcing action from those legally obliged to undertake improvements. 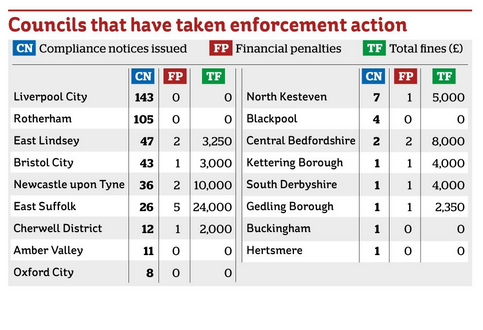 In April 2018, the Government introduced the Minimum Energy Efficiency Standard (Mees), barring landlords from starting new tenancies for properties with an Energy Performance Certificate (EPC) of F or G, the lowest gradings. In April 2020, this rule was expanded to cover all tenancies.

The rules mean that 290,000 rented homes – almost half of which house tenants living in fuel poverty – should receive improvements.

The Government estimates it will cost an average of £1,200 to £2,000 to bring an F or G rated property up to standard, and landlords can claim an exemption if costs exceed £3,500. As of early March, 9,269 exemptions had been registered with the government for domestic properties.

But fears are mounting that thousands of landlords flouting the rules are going unpunished.

Of the 268 authorities which responded to a Freedom of Information request from i asking for details of Mees enforcement, just 17 had taken any enforcement action. Since 2018 a total of 449 compliance notices and just 17 financial penalties have been issued for breaches of Mees with fines totalling £65,600.

The most inefficient domestic properties are up to 2°C colder in winter than the most efficient ones. Bills are high, too – costing £1,000 more a year to heat. Many struggle to afford this: during winter 2018-19, 17,000 people in the UK died due to cold housing conditions.

Birmingham City Council, which has taken no enforcement action, said it was “not proactively undertaking exercises in relation to this issue”. Leicester City Council said its Trading Standards body had deemed the work “low priority”.

The Government plans to tighten the Mees rules gradually, to require landlords to meet EPC ratings of D by 2025, and C by 2030. But without effective enforcement, it is unlikely these standards will be met, warned Ed Matthew, executive director at climate think tank E3G. “These standards are only as effective as the effort and resources that are put into compliance,” he told i. “It does not bode well for a tightening of these standards in future years when there are likely to be far more properties covered. If [councils] can’t cope now, enforcement could completely fall apart in the future”.

Councillor David Renard, housing spokesperson for the Local Government Association which represents English and Welsh councils, said: “Enforcement is usually taken as a last resort, with councils preferring to work with landlords to address any issues.” Councils could do more to raise standards of private rental accommodation if they were given more freedom to establish local licensing schemes for landlords, he added.