Urban air quality is gaining in priority as we see the adverse impact of air pollution. Ben Webster writes on The Times website about a new system that will use AI to improve the traffic flow and thus reduce air pollution. What are your views?

Traffic lights will be used to cut air pollution by holding drivers on red to delay their arrival in areas at risk.

The AI system analyses live and historical data on local pollution and traffic levels and uses it to predict increases up to an hour ahead. The timing sequence on traffic lights can then be altered.

Drivers travelling towards the threatened area will be held on red for up to 20 seconds longer than normal while those travelling in other directions will benefit from extended green phases. 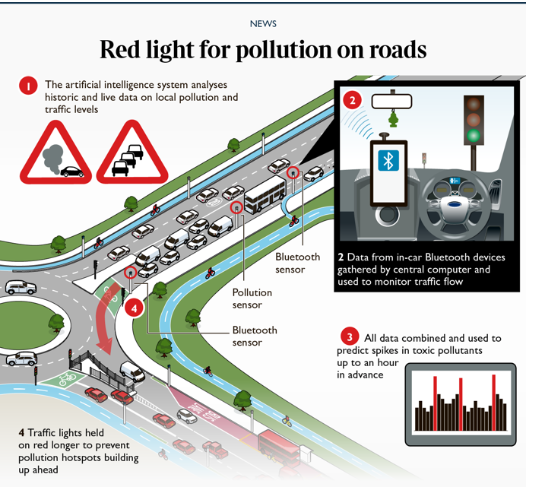 The system, developed by Now Wireless, which supplies pollution sensors and communication systems to 20 local authorities, will be tested on Wolverhampton’s ring road this year. Several other councils are considering using it.

The Times began a campaign, Clean Air for All, last year calling for a clean air act to give councils more powers and resources to enforce stricter limits.

John Charles, Wolverhampton’s traffic manager, said that altering traffic lights would help the city to meet legal limits for nitrogen dioxide without having to resort to penalising the most polluting vehicles with daily entry fees.

He said such charges could be “the death knell” of businesses in the city that relied on people arriving by car. “We need to explore alternatives to keep the city centre open. We are looking to see whether different biasing [of traffic light timings] can improve the traffic flow through at the expense of some of the other routes where air quality is not as bad. It’s about spreading the load to try to improve air quality.”

Changes to traffic light timings will happen automatically when the system predicts a sharp rise in pollution after analysing information from monitors mounted on traffic lights, as well as weather data. The predictions are based partly on records of previous increases and the conditions that led to them.

“Traditionally we wait for devices to sniff the air and calculate what the situation is whereas [this system] is looking to do that an hour in advance,” Mr Charles said. Journey times will be tracked via Bluetooth sensors that receive data from in-car devices. Mr Charles said there was a risk of pollution rising in some areas as traffic spent longer at lights but that the system would be carefully managed. “It’s a very fine balance,” he added.

Edmund King, president of the AA, said: “Whilst well intentioned this technology could easily backfire by holding up traffic, prolonging idling and moving the problem elsewhere. Rather than holding up traffic, we need to accelerate the move to cleaner, greener vehicles. Ironically the pandemic may bring air quality improvements in the longer term with 22 per cent of drivers saying they will drive less after lockdown and more people saying they will continue to work from home.”

Wolverhampton will also use variable message signs to divert drivers from polluted areas. Plans to introduce clean air zones in Birmingham, Leeds and Bath in which the most-polluting vehicles are charged an entry fee have been delayed, partly because of a refocusing of resources to deal with the pandemic. The government said it now expected the zones “no earlier than January”.