Katherine Ellsworth-Krebs, Senior Research Associate, Lancaster University has an important message in an article she wrote on The Conversation website: To reduce overall energy demand, we need to start looking much more closely at housing policy rather than improving technology in individual homes. This fits well with the work undertaken by the eceee and expressed in its dedicated website on sufficiency. What are your views?

Around the world, more people are living with more space at home than at any other time in history.

This may be surprising – cramped, dingy rooms are as familiar in Shanghai as they are in London. But on average, the space per person in Chinese homes has increased by nearly 30 square metres in 40 years, and by four square metres in the UK over the past 15 years.

This trend is linked to something called the “second demographic transition”. Put simply, as countries develop, individual incomes rise and people prioritise higher order needs, such as privacy, autonomy and the fulfilment of personal ambitions. 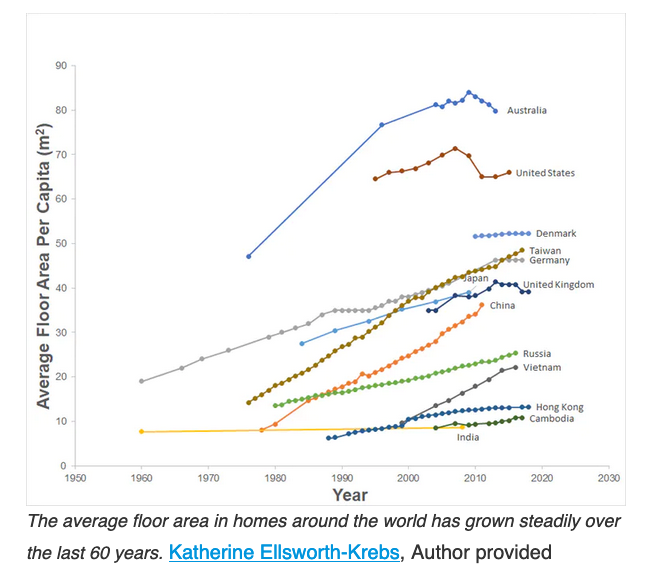 Think of that feeling when you just need time by yourself. In high income countries, it’s likely that you can expect to find somewhere in your home where you can shut yourself away and do what you want. These expectations can have implications for how much space we might expect per person in the home. Rather than having to watch a show all together in the living room, we might now expect to each have our own computer, or be able to watch our own television in our own bedroom.

Another aspect of this transition is that young people are likely to find partners and become parents later in life. Instead of moving from living with parents to living with a spouse, there are more opportunities to live alone – such as going to university. As a result, the number of people living in a household shrinks.

Likewise, households with multiple generations are on the decline. In Japan, 66% of women surveyed in 1950 expected children to support them in old age. In 1990, this fell to 16%. Some figures suggest that half of over 65-year-olds in high income countries now live alone. This means more one-person households, which drives up the house space per person. Around 40% of Scandinavian households and 30% of UK and US households are occupied by one person.

Having more space per person on average in homes helps reduce overcrowding. That’s good for reducing transmission during the COVID-19 pandemic. It may also mean there is enough space for desks, monitors and toys for home working, schooling and child entertainment.

Nonetheless, there are also implications for household carbon footprints. In a nutshell, more space per person is more space to heat per person.

Worldwide, three-quarters of energy use in buildings is for homes, and nearly 70% is for heating. The energy efficiency of buildings is improving globally by 1.3% annually, but their floor area is increasing at a faster rate (roughly 3% per year).

To meet the growth in floor area with higher demand for warm homes, the International Energy Agency suggests energy efficiency would need to improve by 30% by 2025. With this in mind, some energy researchers have argued that without limiting the average dwelling floor area per person, “it is hardly imaginable” that there could be an absolute reduction in household energy demand.

More than information on upgrading boilers or installing efficient light bulbs, marketing about the drawbacks of larger homes and the upside of downsizing could be more effective to reduce energy use. Smaller homes are more affordable, cheaper to heat and cool, demand less time and labour to clean and maintain and can occupy just one floor – good for people who struggle with stairs.

Since a basic necessity of housing is a sense of personal space and privacy, regulations could improve the experience of living in high-density housing. This could mean giving renters the right to own pets and decorate, or improving the standards of soundproofing. In the UK, poor soundproofing and disturbance from neighbours is one of the most common complaints about living in flats, and why many choose to move into a detached house.

Governments could also build social housing that prioritises communal forms of living and “co-housing”. For instance, this could mean having communal “guest rooms”, so that individual flats don’t have additional bedrooms and bathrooms that stand empty for much of the year.

Technology will play a large part in improving energy efficiency and decarbonising energy. But low-carbon domestic heating systems like heat pumps, biomass boilers, low-carbon design standards and improved insulation aren’t sufficient on their own. These types of solutions don’t address the root causes of the second demographic transition, which has led to a proliferation of bedrooms and bathrooms and increased expectations of privacy and personal space.

To reduce overall energy demand, we need to start looking much more closely at housing policy rather than improving technology in individual homes.