Bobby Duffy, Professor of Public Policy and Director of the Policy Institute, atKing’s College London writes on The Conversation website about how ordinary people underestimate the seriousness of climate change. He states that  climate campaigners have to realise that it’s not enough to just provide more facts and expect people to hear them and act. What are your views?

Climate change: Americans are worried, but still underestimate how serious it is

The world is often better and getting better than people think. Murder rates, deaths from terrorism and extreme poverty are all down. Life expectancy, health and education levels are up. But, as I explore in my book Why We’re Wrong About Nearly Everything, people mostly think things are worse than they are and going downhill fast because of the natural tendency of humans to focus on negative stories and forget how bad the past was.

But there is one vital, even existential, exception: people still don’t realise how bad the world’s climate and natural environment have become. Misperceptions about climate change and the ecological crisis are all too clear from a new survey of Americans that tested their understanding of how far the problem has progressed in their lifetimes.

Recycling will save us?

It’s an extraordinary fact that all 20 of the hottest years on record have been in the last 22 years. But when we asked the US public how many of the past 22 years have been among the hottest, the average guess is 14, and only 15% of Americans correctly guess that it is all 20 years. Democrats are slightly better at getting the right answer (23%) than Republicans (9%).

It’s understandable that people might be poorly versed in statistics like this, but there’s also confusion over what the biggest causes of warming are. The people we interviewed guessed that 16% of global greenhouse gas emissions come from air travel, when it’s only around 2%. While aeroplanes emit a lot of CO₂ during each flight, air travel is still relatively infrequent, compared with, say, car journeys.

The rarity of flying explains why, despite aviation’s relatively limited contribution to emissions, one of the most effective actions a person can take is to fly less. A study by Swedish academics puts skipping one transatlantic flight as the third most effective action someone can take, only behind having one less child and living entirely car free. But only 10% of the US public pick out skipping the flight as one of the top three. Instead, 45% thought recycling as much as possible is a priority for reducing emissions – a much less effective action than giving up just one flight.

The people we spoke to also didn’t realise just how much wildlife has suffered over the past few decades, and how precipitous the decline in populations has been. Only a quarter of the US public correctly identify that the population sizes of mammals, birds, fish and reptiles in the world have declined by 60% since 1970. Again, Democrats were slightly better than Republicans: 26% selected the correct, terrifying answer, compared with 16% of Republicans. 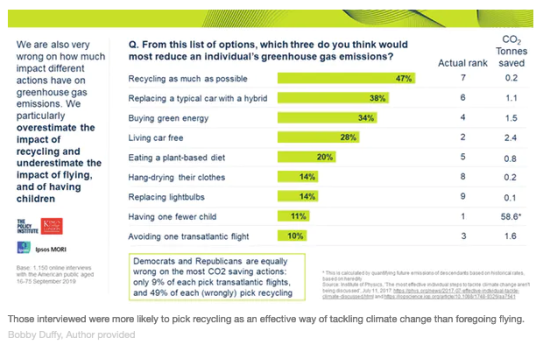 Despite low engagement with the scale of the problems, people are still worried.

Our new polling also showed that 60% of Americans reject President Donald Trump’s past assertion that global warming is an “expensive hoax” – and instead, 62% agree that the world is facing a “climate change emergency, with the threat of irreversible destruction of our environment in our lifetime”.

This very different view between party supporters is despite only relatively small differences in perceptions of the reality between the two groups. This shows that attitudes to big issues like climate change are sometimes so tied up with political identity, including attachment to political parties, that understanding the facts is often secondary.

This is a real challenge for those campaigning for climate action. It’s not enough to just provide more facts and expect people to hear them and act, regardless of how extraordinary those facts are.