Delivering the energy transition at the rate needed to meet agreed climate targets will require changes much faster than we have achieved for decades. On that there is agreement. But what is the role of efficiency improvement and demand reduction in this?

We know what the energy industry vested interests think. According to the Shell UK website, Our response to Climate Change: “Experts agree global energy demand is likely to double by 2050 compared to demand in the year 2000.” (They carefully avoid naming their experts!) Fortunately, less-biased and better-informed opinion disagrees. Recent analysis by the IEA shows explicitly that energy efficiency has a central role in delivering net zero globally, leading to falling energy demand.

National analyses tend to find the same, for example in the UK, both the work of the Government’s official advisory group, the Committee on Climate Change, and analysis within CREDS. Indeed, every plausible scenario for delivering climate targets depends critically on delivering these improvements; it is rarely the headline finding, but always a major component.

Understanding why depends on thinking about the energy transition from the perspective of energy use. Outside the ‘energy demand community’, most people think of the zero-carbon energy transition as simply a shift in energy supply from fossil fuels to zero carbon energy sources, or more specifically to renewables. In the energy demand community, we have always argued that reducing demand will also be important, as a means to reducing the amount of energy that needs to be decarbonised, and therefore the cost of the transition.

But the two processes – decarbonisation and demand reduction – are usually treated as separable. In a recent paper published in Energy Efficiency, I argue that this is a such a seriously incomplete analysis as to be misleading. Energy efficiency improvement and renewable deployment are synergistic.

The argument starts from the, now familiar, insight that energy systems compatible with net zero require decarbonisation of much more than the current electricity system. They will require much higher levels of electrification. Most mainstream analyses, such as by the IEA, now see the transition as a multi-stage process:

In essence, zero carbon electricity (whether directly or via green hydrogen) ultimately ends up replacing fossil fuels to power the world.

An additional scientific insight comes from thinking about the thermodynamics of this change and of energy transitions more generally. Before the industrial revolution, there was no unified energy system. If you wanted energy for ‘heat’, you burnt something – usually wood. If you wanted energy for ‘work’, you did it yourself or got a strong animal to do it for you (or, in special cases used early wind or hydro technology). The industrial revolution delivered a fossil fuel takeover, with both ‘heat’ and ‘work’ supplied by fossil fuels, the latter through the new-fangled technologies of heat engines. The whole sub-discipline of thermodynamics was developed in the 19th century to provide an understanding of these changes, and in particular the rules governing the conversion of heat into work and vice versa.

The post-carbon transition looks likely to be as fundamental a change to energy systems as the industrial revolution. Renewables are already substituting for heat in electricity generation. We are beginning to see heat engines being replaced by electric motors in transport, and, at least in some countries, steps towards much wider replacement of combustion in heating by using ‘heat engines in reverse’ (heat pumps).

In essence, after the post-carbon transition, most energy services will be provided from sources of work rather than, as now, from sources of heat. And it is one of the most basic predictions of thermodynamics (its 2nd Law) that work can be converted into heat more efficiently than heat can be converted into work. So, in principle, an energy system run off renewable work can be more efficient than one run by burning fuels.

As so it is proving in practice. Electric vehicles typically require less than one-third of the energy as internal combustion engine vehicles. And heat pumps require less than one-third of the energy of boilers. These are the paradigm examples, but a similar effect is seen across a range of final energy conversion technologies from steelworks to cookers. Most of the effect is linked to electrification, but hydrogen can also contribute, as it can be converted directly in work without combustion using fuels cells.

The paper goes through the global energy system, energy service by energy service, to quantify the scale of the effect of changing their final energy conversion devices to those needed in a decarbonised world. The overall effect is a potential 40% improvement in energy efficiency, and therefore, other things being equal, a 40% reduction in energy use. As shown in the Figure the effect is bigger in buildings and transport than in industry. 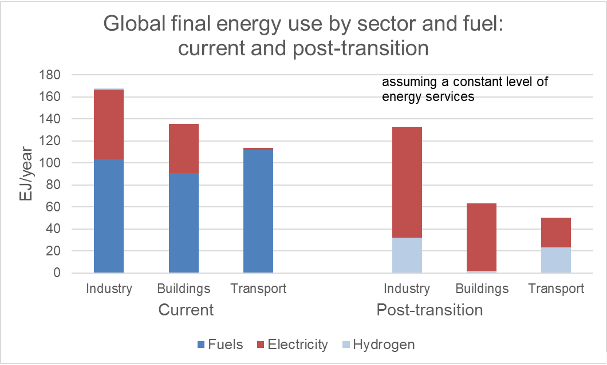 All this is before we take into account the potential of other energy efficiency options that we know are also large, such as building insulation, modal switching in transport and materials efficiency.

So this potential improvement in final energy conversion efficiency, driven by the energy transition, is a very large effect. It seems very likely to be a critical part of carbon emissions mitigation. It means there are major synergies between renewables and energy efficiency. It is well-known that energy efficiency can help renewables by reducing the amount of energy that needs to be decarbonised. But (work producing) renewables will also help efficiency by enabling the use of more efficient end-use conversion technologies.

Far from its potential being largely ‘used up’, a whole new generation of energy efficiency improvement is about to be enabled. Those energy industry vested interests who expect demand to rise are going to be disappointed.

About the Author: Professor Nick Eyre, based at the University of Oxford, is the Director of CREDS and a Professor of Energy and Climate Policy. CREDS is the Centre for Research into Energy Demand Solutions, a research centre established in 2018 with a vision to make the UK a leader in understanding the changes in energy demand needed for the transition to a secure and affordable, net-zero society.