Emily Badger and Alan Blinder write about air conditioning in the United States and what its impact has been. This is an article in The Upshot section of the New York Times. The Upshot provides news, analysis and graphics about politics, policy and everyday life. This makes for good summer reading as some of you swelter and, obviously, others do not.

How Air-Conditioning Conquered America (Even the Pacific Northwest)

Air-conditioning has been remarkably good at creating demand for itself.

It enabled the sweeping postwar development of the South, where all new single-family homes today include central air. In automobiles, it made the commutes between air-conditioned homes and air-conditioned offices possible. In the Southwest, its arrival facilitated new methods of rapid construction, replacing traditional building designs that once naturally withstood the region’s desert climate.

By doing all of this, air-conditioning has contributed to the intensive energy demand that worsens climate change that, well, forces us to rely on air-conditioning, a feedback loop environmentalists fear.

And so here we are, in 2017, with temperatures racing past 100 degrees in the Pacific Northwest, the region of the country that has historically relied the least on air-conditioning. And now more people, even there, are installing the technology.

“The last — ay yi yi — three and a half to maybe five years, it seemed that I’ve either lost tolerance of sleeping in the heat or it’s just been hotter,” said Susan Krummann, who lives outside Portland. She’s the service manager for a heating and air-conditioning company there. But she, of all people, gave in to an installation only in late June. “I’m 55, and I deserve a little comfort,” she said.

Decades after air-conditioning made much of the Sun Belt livable, it has now become standard nearly everywhere. Eighty-six percent of new single-family homes in the Northeast are now built with it; 94 percent in the Midwest are. Parts of the United States whose historical development never depended on air-conditioning increasingly resemble the regions whose growth wouldn’t have been possible without it.

“Air-conditioning is reaching where it hasn’t reached before,” said Don Prather, the technical services manager with the Air Conditioning Contractors of America. “It’s been moving north and northwest, in every direction.” 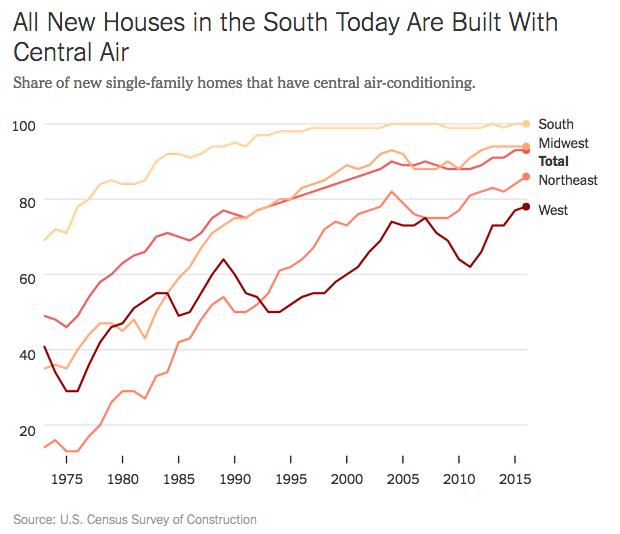 After the 1950s, air-conditioning enabled not just the construction of millions of Southern homes, but also the economic development of the South. It made possible industrial work like printing, food processing and electrical manufacturing that would be hard to manage in sweltering heat. And it created the possibility for white-collar jobs in mechanically cooled office buildings.

“It’s hard to imagine that, say, Birmingham would be a big center of health care industry, or that Atlanta would have the world’s busiest airport, or that Jacksonville would be a center for insurance if people were sitting under ceiling fans in hot, humid offices,” said Stan Cox, who coordinates agricultural research at the Land Institute in Salina, Kan., and wrote a 2012 book about our reliance on air-conditioning.

Southern cities that boomed in the era of air-conditioning typically did not have the transit systems of older, Northeastern cities like New York and Boston. But even car commutes there have their own air-conditioned rationale: People are willing to cope with the traffic created by sprawl because their cars are air-conditioned.

An urban scholar, Robert Fishman, surveyed regional-planning historians about the top influences on the American metropolis in the second half of the 20th century. The list included air-conditioning, but also Interstate highways, cars, enclosed shopping malls, sprawl and mass-produced suburban tract homes. “If you think about it,” Mr. Cox said, “air-conditioning was involved in all of those becoming even feasible or popular.”

Thanks to these patterns, Atlanta, Dallas, Miami and Phoenix boomed as people began migrating out of the Northeast and Midwest.

“Phoenix is a relatively recent city — it was just a stop on the highway to the West before air-conditioning,” said Prem Sundharam, who is based in Phoenix and is an expert in sustainable design with the architecture and engineering design firm DLR Group. In 1950, barely 100,000 people lived in the city. Today, 1.5 million do.

But during that time, Mr. Sundharam says, the region strayed from the types of “passive design” and concrete-block exteriors that once made the desert’s large daily temperature swings tolerable (if not entirely pleasant). Air-conditioning enabled faster wooden housing construction.

And in offices, central air systems demanded that buildings be sealed off from the outside. Windows couldn’t be opened even if you wanted to — requiring people, again, to turn up the air-conditioning.

“With the advent of air-conditioning, we lost a lot of the common sense,” said Kirk Teske, the chief operating officer at HKS Architects, with headquarters in Dallas. He worries that regions like the Northeast may lose it, too, setting up future challenges for office workers and residents when blackouts or other natural disasters come. “I sometimes say the best sustainably minded architects are all dead now,” Mr. Teske said. “They’re the ones that were able to do these big buildings knowing they had to do so without the benefits of air-conditioning systems.” 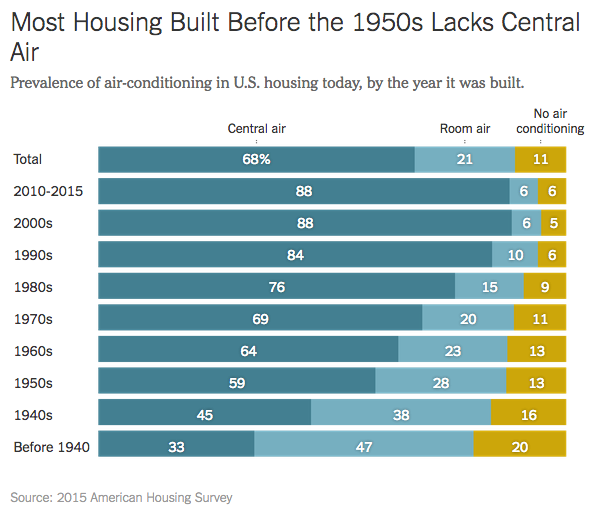 It’s clear in census data that older buildings are the least likely to be air-conditioned (and regions that developed the earliest have the most such housing). Window units now fill some of that gap. Robert Dietz, the chief economist for the National Association of Home Builders, estimates that about 3.6 million detached single-family homes built in America since 1973 have been upgraded to include central air.

Today, even many condos rising in perennially cool San Francisco include central air. That’s happening as the city sees more high-rise apartments directly exposed to the sun toward the south and west, said Alan Mark, who runs a real estate marketing and consulting firm. Most new housing, he adds, is also rising in the sunniest parts of the city.

In Portland and Seattle this week, a record-breaking heat wave has been changing expectations, too. Washington, Oregon and California together have long had the lowest rates of air-conditioning of any census division in the country. In 1990, just a third of households there used central air or window units. Now twice as many do. 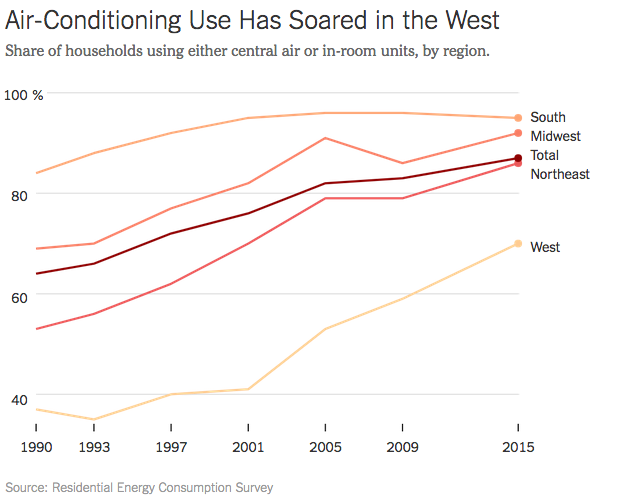 Eloise Younie, who lives in a 65-year-old southwest Portland home with her family, said she had resisted air-conditioning because of the financial and environmental costs of a unit. But future heat spikes, she said, might make her rethink her approach.

“If this becomes the new normal, then maybe I’m going to have to reconsider some things,” she said on a day when the temperature reached 103 in Portland. “Right now, it’s not really feasible logistically,” she said. “I can survive with fans and open windows once the sun goes down and the breeze comes up.”

She was not especially surprised to hear of the Pacific Northwest’s rising interest in air-conditioning. She expected some of it could be traced to people moving to Oregon from more air-conditioning-dependent parts of the country.

“We get a lot of people from California moving up here,” she said. “And I’m sure it’s unfathomable for them to think, ‘Oh wow, I don’t have air-conditioning up here.’ ”